A Day in the Life of an “Iskander” Missile System

HomeA Day in the Life of an “Iskander” Missile System

A Day in the Life of an “Iskander” Missile System

Who doesn’t like a quick and sweet geolocation challenge?

Part of my work on T-Intelligence involves monitoring “adversarial activities,” which includes keeping tabs on military hardware deployments of hostile foreign governments such as the Russian Federation. I am especially interested in what is commonly known as anti-access area denial (A2/AD) equipment.

Designed to evade modern missile defenses and launch both cruise and ballistic missiles, the Iskander is one of Russia’s most frightening weapons, hence the value of “stalking” it whenever possible.

From a military intelligence perspective, the basic information you want to find out is:

The video was uploaded on February 1st. However, it is unlikely that the video was shot, edited, and uploaded on the same day. So it’s safe to assume that the exercise took place shortly before, likely in late January.

The video caption is consistent across all social media posts (Twitter, Youtube, and Facebook) and points towards a training site “near Yekaterinburg” as the exercise ground. This is not a definitive answer. In intelligence, we need clear, cold facts. So, to answer the “where?” (as in longitude and latitude), geolocation is required.

“Near Yekaterinburg” is a generous starting point. Using crowdsourced databases of Russian military facilities, paired with satellite imagery, I looked for candidate sites around Yekaterinburg.

When inspecting the bases, I specifically kept an eye out for structures that might match the video’s warehouses. Most Russian bases are pretty rundown, so I counted on the modern-looking storage facilities to stand out (and they did).

Moving to validation, I compared key visual clues from the video with Google Earth Pro imagery of the supposed location.

Geolocation image 1/4: Iskander TEL leaving warehouse (hover over/click on the image to see it in color)

Easy peasy. Geolocation confirmed that the Iskanders from the video left the 119th Missile Brigade base. More precisely, the TELs were stored in the northeast corner warehouse.

Geolocation image 2/4: Iskander TEL leaving warehouse (hover over/click on the image to see it in color)

As the exercises simulated “group and single strikes on enemy positions,” the missileers drove their vehicles to pre-designated launch points in a forest. The dense canopy helps cover their tracks, while the multitude of forest roads and hideouts complicate enemy (geospatial) intelligence tracking efforts.

The director of the video was, however, generous enough to take some close aerial shots of the staging point. This made the small opening in the woodland very easy to find using overhead imagery. GPS position: 56.8392666° N, 62.4476784° E Geolocation image 3/4: Iskander vehicles arriving at the staging point (hover over/click on the image to see it in color)

Another interesting detail in the video is the missile itself. The transloader arms the TEL with what appears to be a 9M728 ground-launched cruise missile (GLCM). Capable of a 500 km engagement range, the 9M728 (known as “SSC-7” to AFIC and NATO) is the Iskander-M’s secondary offensive capability. 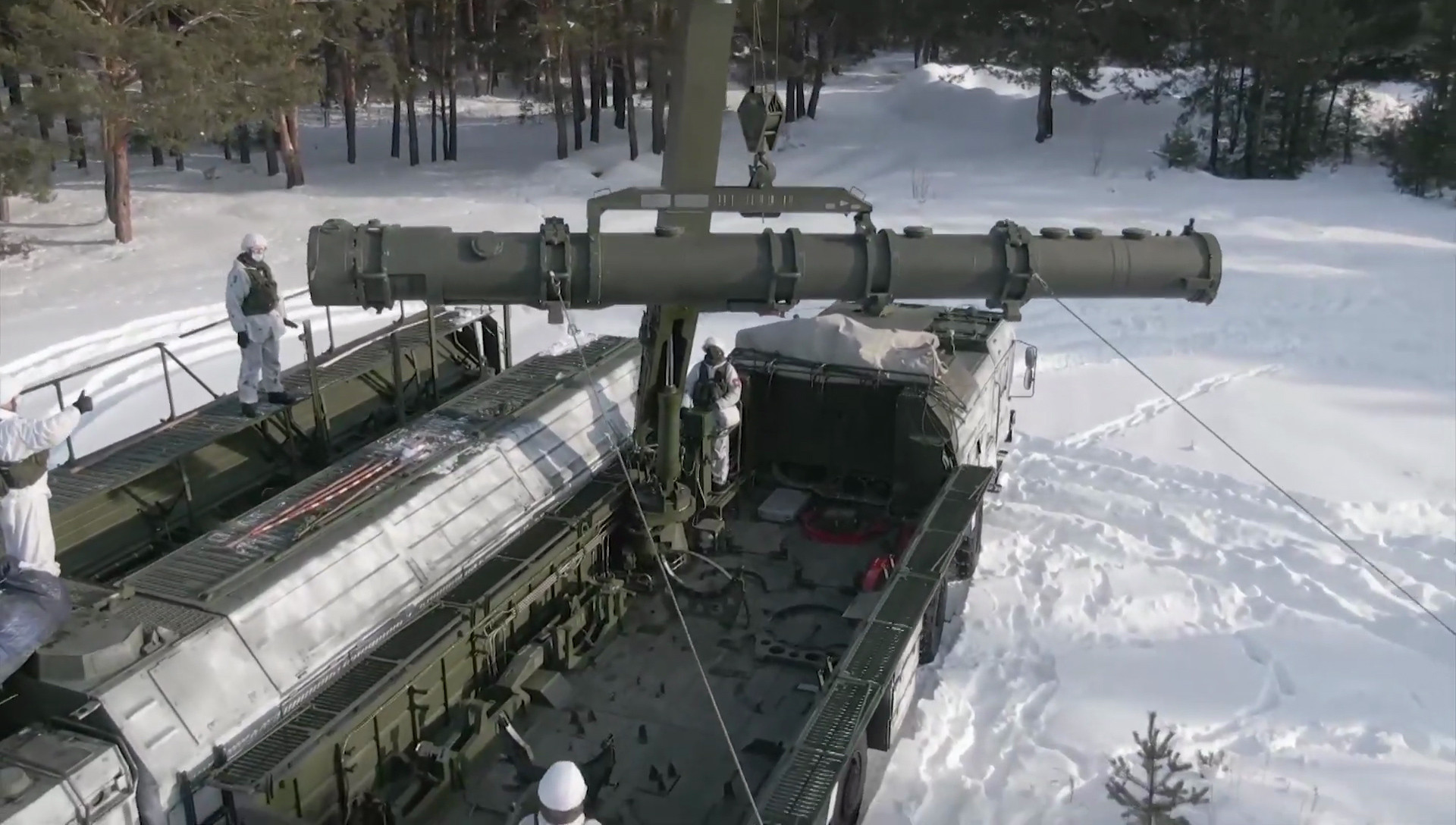 Iskander crew arm the TEL with a GLCM

This GLCM is the precursor of the 9M729 (SSC-8), a missile that is estimated by the United States to violate the Intermediate-Range Nuclear Forces (INF) treaty. Despite the cruise missile component, the Iskander is most feared due to its 9M723 short-range ballistic missile (SRBM).

To wrap it up, the Iskander crew traveled approximately six kilometres from their warehouse to the firing position. Here’s an overview to put things into perspective: 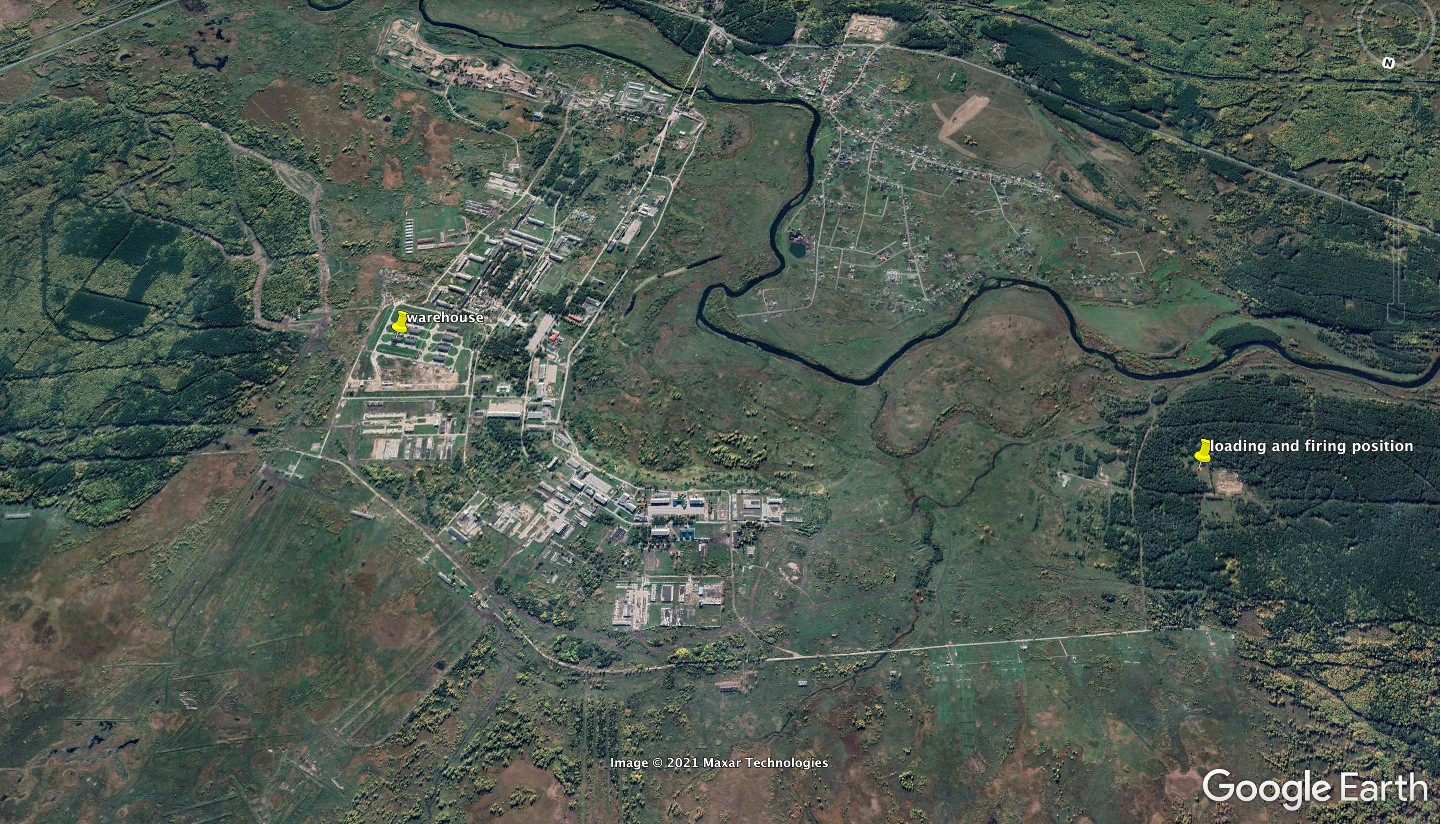 Geolocation image 4/4: Overview of Iskander deployment (hover over/click on the image to see it in color)

The video ends with a Russian soldier announcing the missile launch from inside the tractor head.

This part is not from 2021. The Russian editing team recycled the footage from a 2019 clip featuring the same unit conducting a similar exercise (thank you reverse image search).

This blog post is a limited simulation of the work that goes into a simple military intelligence (MI) report. Troop disposition, base readiness level, unit performance, logistical preparations, and context are other critical ingredients for a MI product. In turn, this will help build a picture of that specific military unit and could provide early-warning indicators of when a similar deployment will be repeated in the future (maybe even in case of war).