Perspective is Everything: Authenticating the Aerobics Video during the Myanmar Coup

HomePerspective is Everything: Authenticating the Aerobics Video during the Myanmar Coup 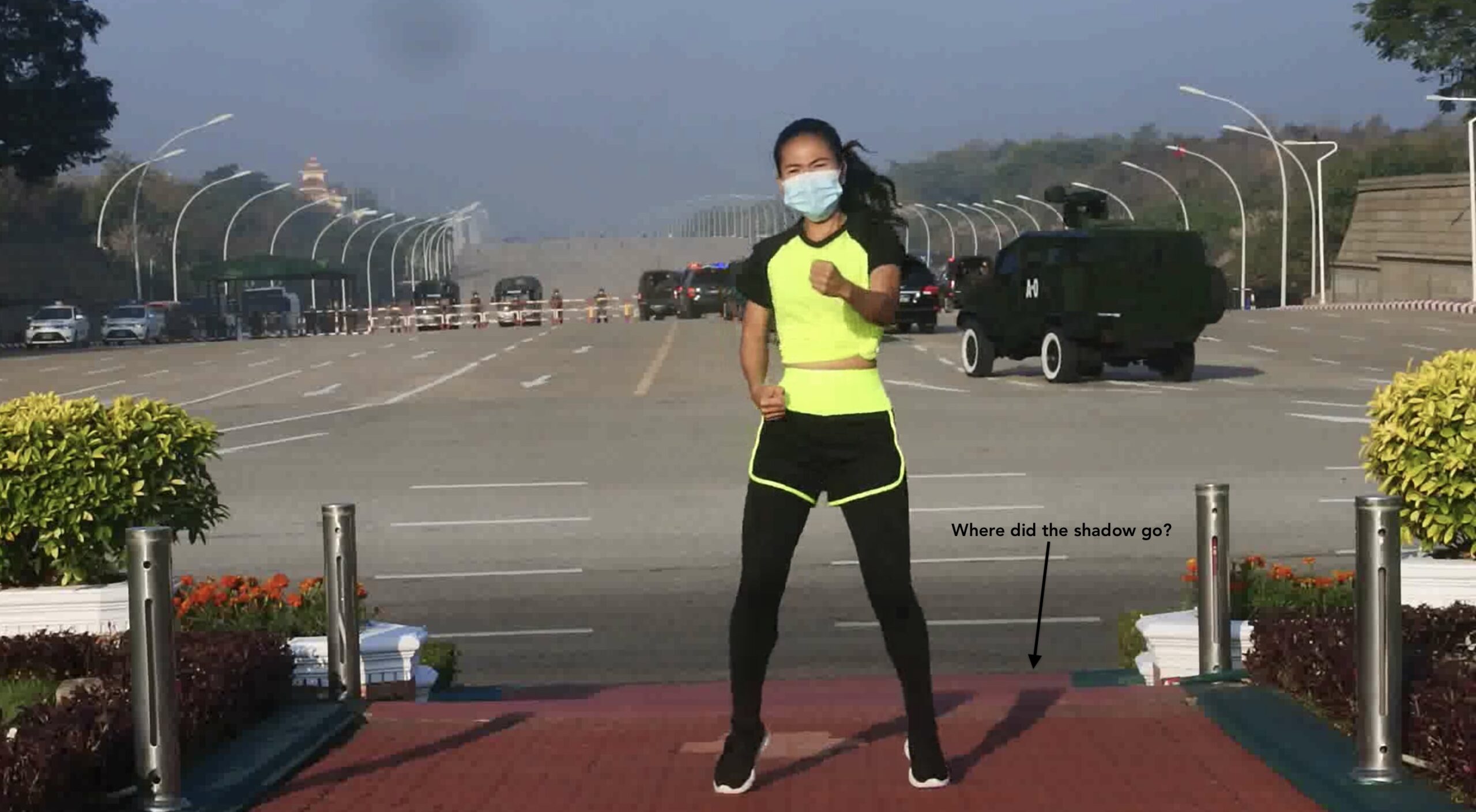 Perspective is Everything: Authenticating the Aerobics Video during the Myanmar Coup

On Monday, a video went viral that shows a personal trainer doing her aerobics routine against the backdrop of a military coup in Myanmar. Not even the wave of armoured personnel carriers and police vehicles could interrupt her catchy workout beat (the new 2021 anthem?). The surreal scene made waves on social media where users scrambled to fact-check the video.

Using Google Maps, the video can be easily traced to the Royal Lotus roundabout in the capital’s ministry zone. So media authentication via geolocation checks out.

While this confirms the location, many observers have asked whether the clip is a forgery because the shadow behind the PT appears “broken.”

Some commentators jumped to conclusions, claiming that the PT had a green-screen behind her where footage from the coup was later added using specialized software. This would “explain” why her shadow abruptly ends. 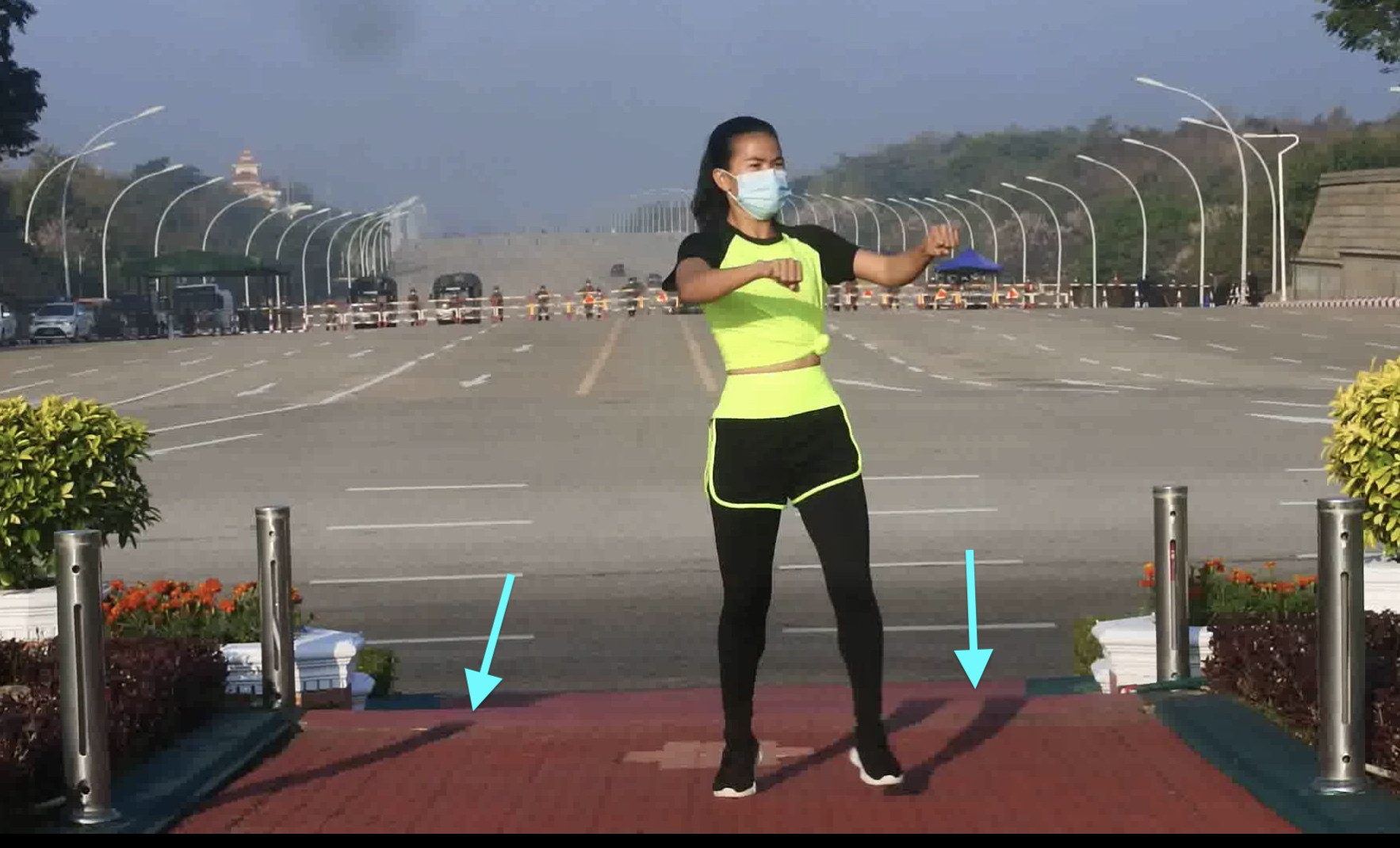 The right shadow appears “to disappear.” *Appears* being the operative word (hover over/click on the image to see it in color)

A quick analysis of the PT’s public Facebook posts shows that she has filmed many other workout videos in the same location. After the viral video, she has released more videos of her exercises in Lotus square over the “past 11 months.”

Critics nevertheless claim that she green-screened all of her clips to show the 6-lane freeway (Yaza Htarni Road?) in the background. The “broken shadow” remains their smoking gun.

While not obvious at first glance, a second bias-free look shows that the shadow *seems* broken because it falls on the steps behind the aerobics lady. The video was likely shot with a long lens focus, which emphasizes the subject but obfuscates the objects behind. This makes it difficult the tell the real proportions and distances.

Overhead imagery from Google Maps is too low-res to clearly show the steps, but we have something better… StreetView! Dropping the “yellow guy” on the lane closest to the roundabout gives us an interactive 360-degree view of the area, where the stairs are clearly visible. 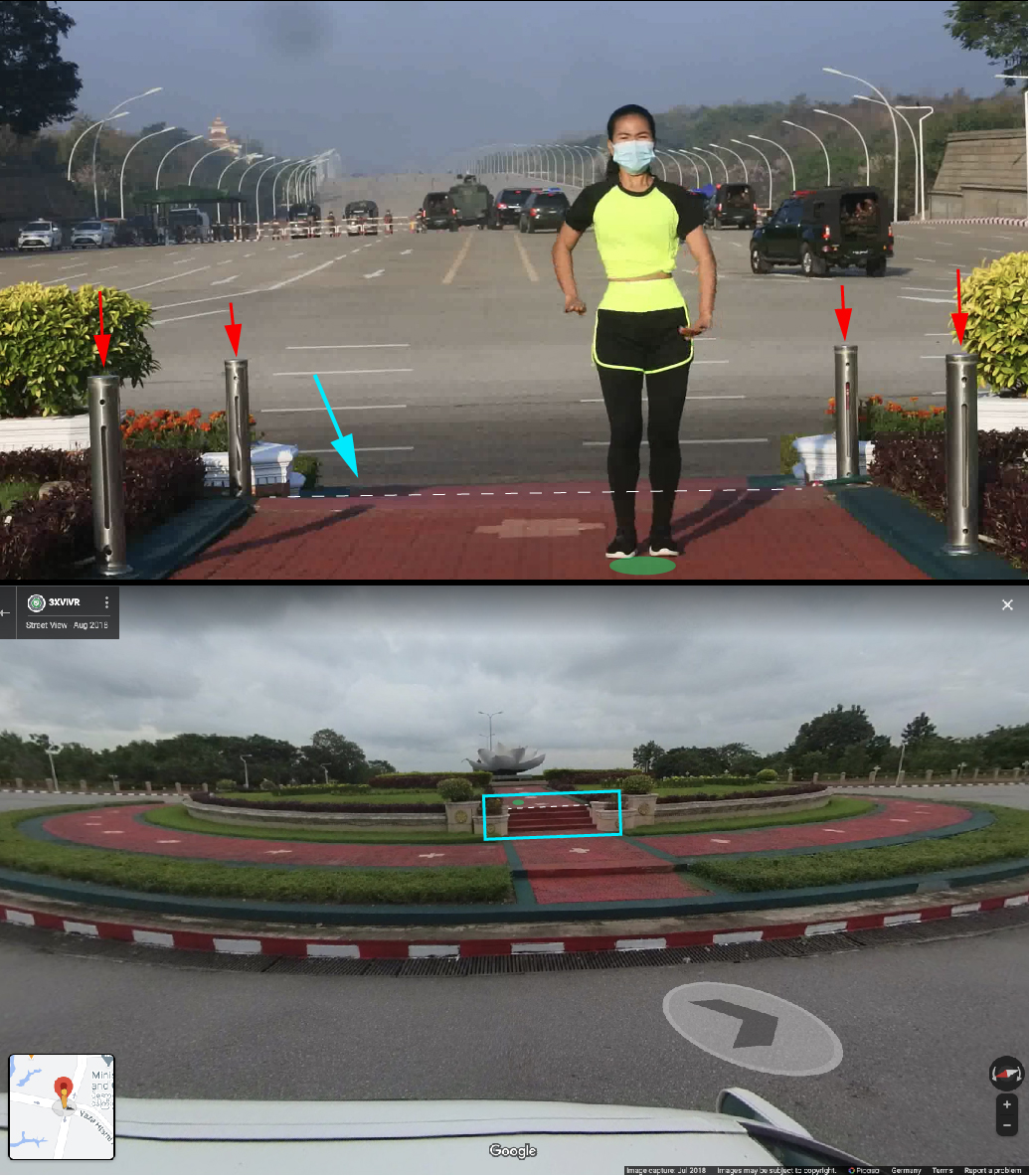 Noticed the grey posts missing in the Street View imagery? That’s not a theory-buster. Chances are that the bollards were installed sometime between August 2018 (when the ground-level image was taken) and January 2021 (PT dancing video).

This should serve as a reminder to always factor the “4D” element, TIME, into visual investigations. Remember images like these are snapshots of how a place on Earth looked at a certain point in time (same goes of geospatial imagery).

Why is this even a thing? That’s anyone’s guess. However, one must to recognize the PT’s commitment to her training routine. Not even a military coup could hold her indoors.

Surreal as it might seem, this video makes for a lighthearted OSINT-relevant case study. The main takeaway is that confirmation bias can hinder even simple puzzles, despite having a plethora of useful tools at our disposal to fact-check.

The truth is, this can happen to anyone. But let this serve as a reminder that analytical tradecraft is indispensable when performing OSINT.