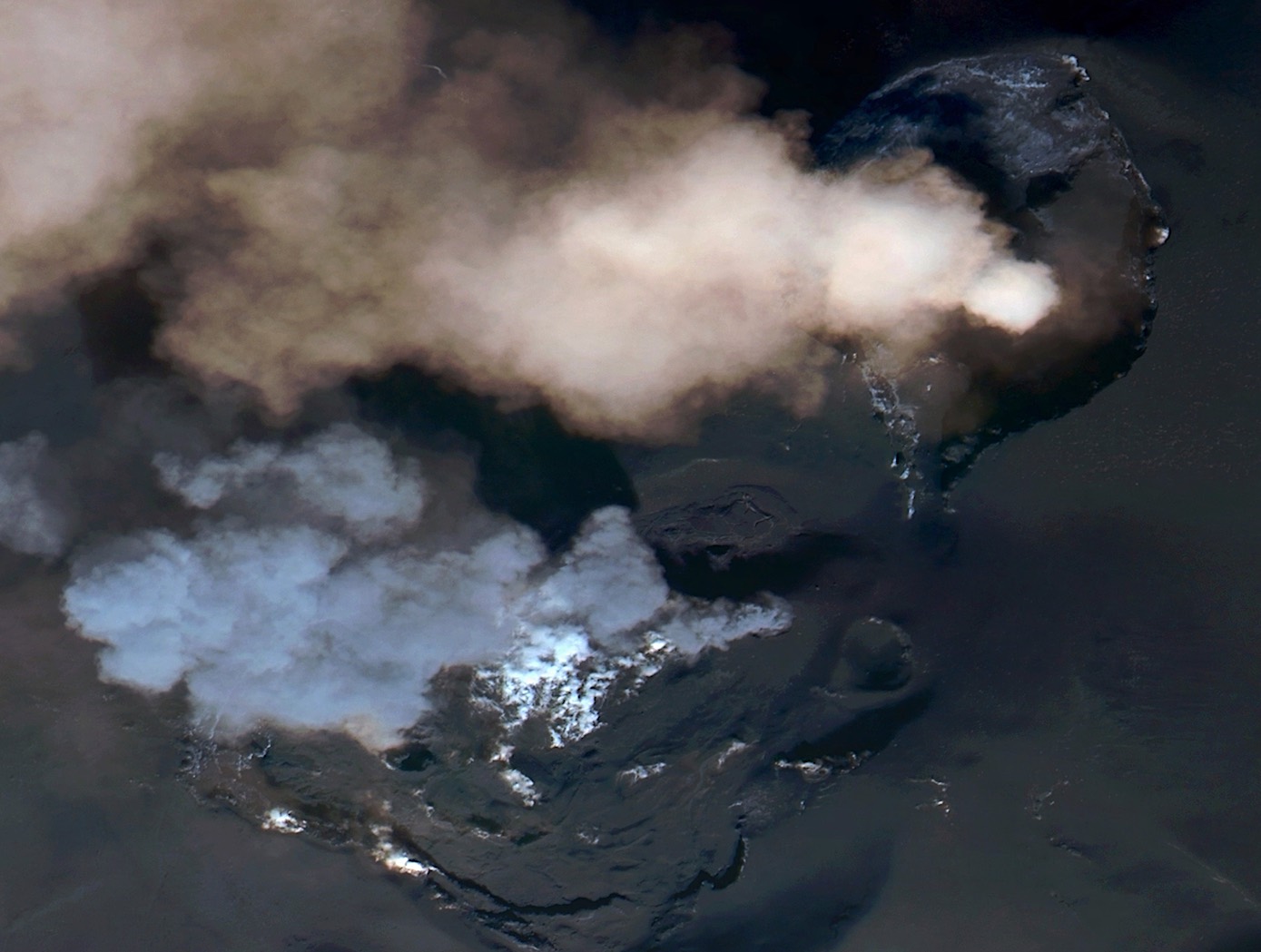 Mount Etna, Europe’s tallest active volcano, erupted on Tuesday, February 16th. Towering 3,350 meters over Catania on Sicily’s eastern coast, Etna has been belching smoke and ash for the past 48 hours.

(Hover over/tap on the images to see them in color) 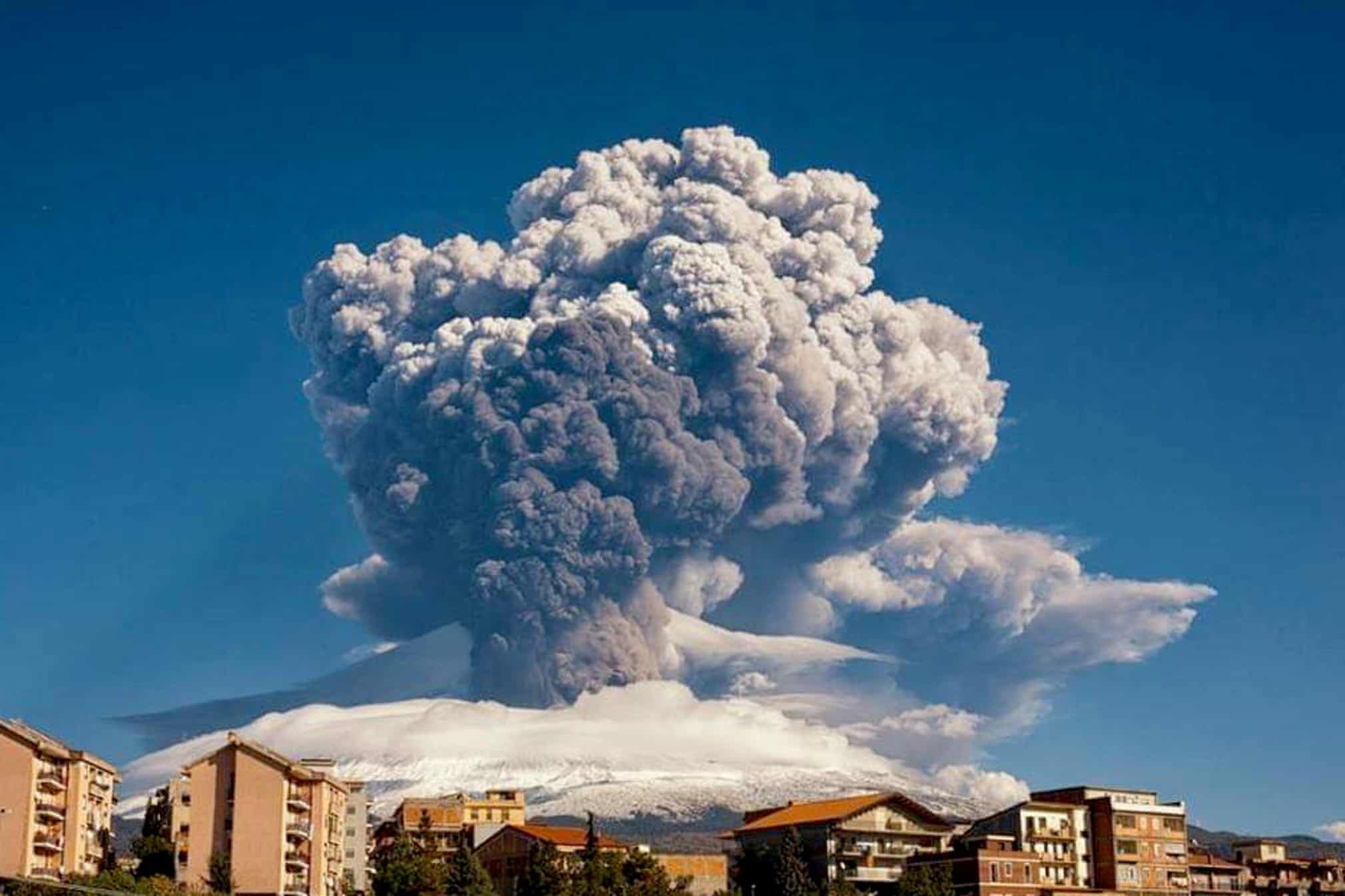 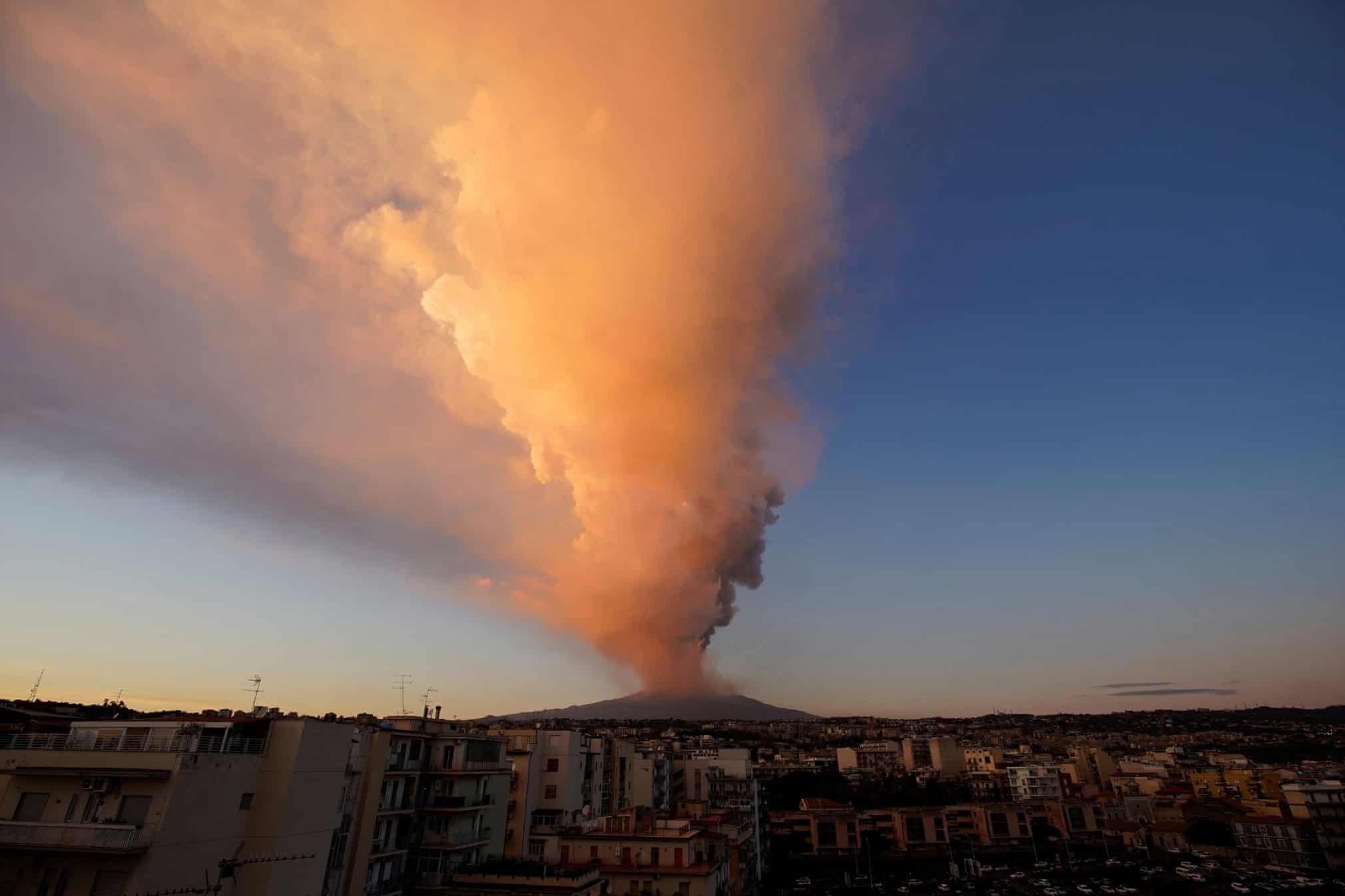 Tonnes of volcanic ash are thrown up into the atmosphere during the eruption Photograph: Antonio Parrinello/Reuters 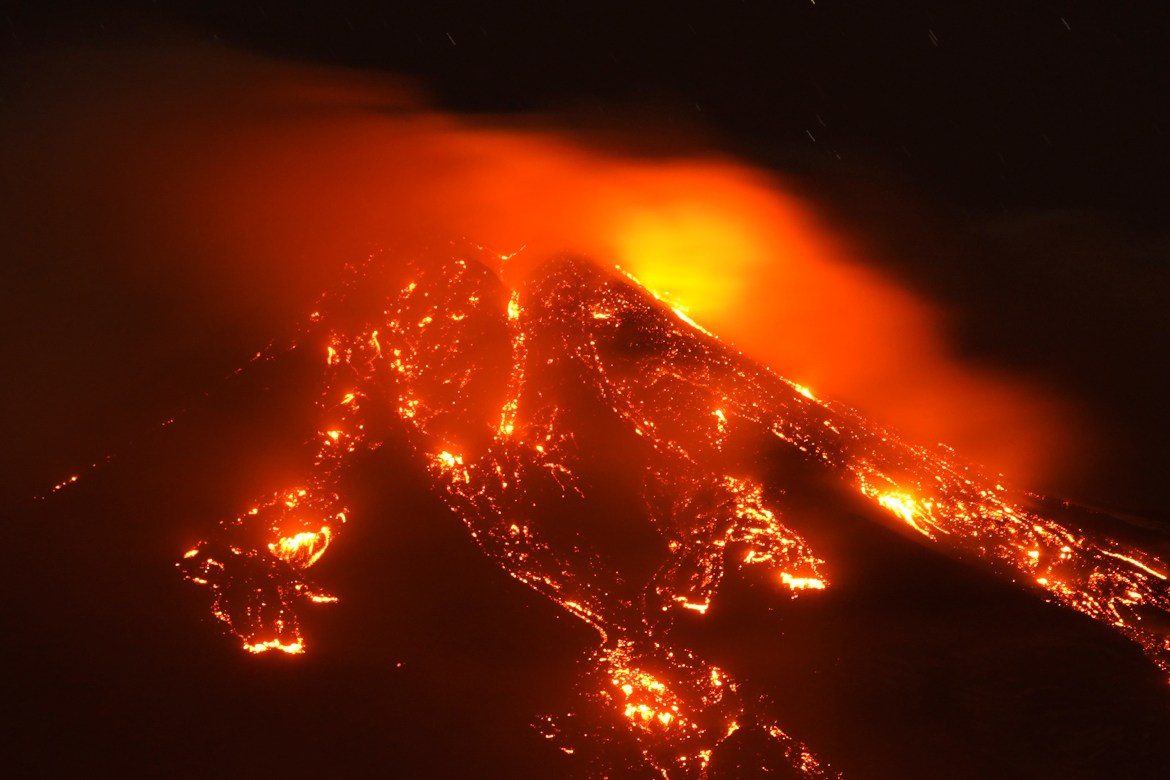 Despite the dramatic scene, Italian authorities insist that the eruption is not significant.

As a precaution, the nearby Catania airport temporarily suspended flights. A good call, considering that the wind is blowing from the northwest, pushing volcanic debris towards Catania (southeast of Etna) – see Zoom Earth weather simulation.

OSINT FOR THE ENVIRONMENT

At the time of this article’s writing, the most recent Sentinel-2 imagery available on Sentinel Hub’s EO Browser dates from February 16th, when the eruption began. True-color imagery shows early signs of volcanic activity in three of Etna’s craters. 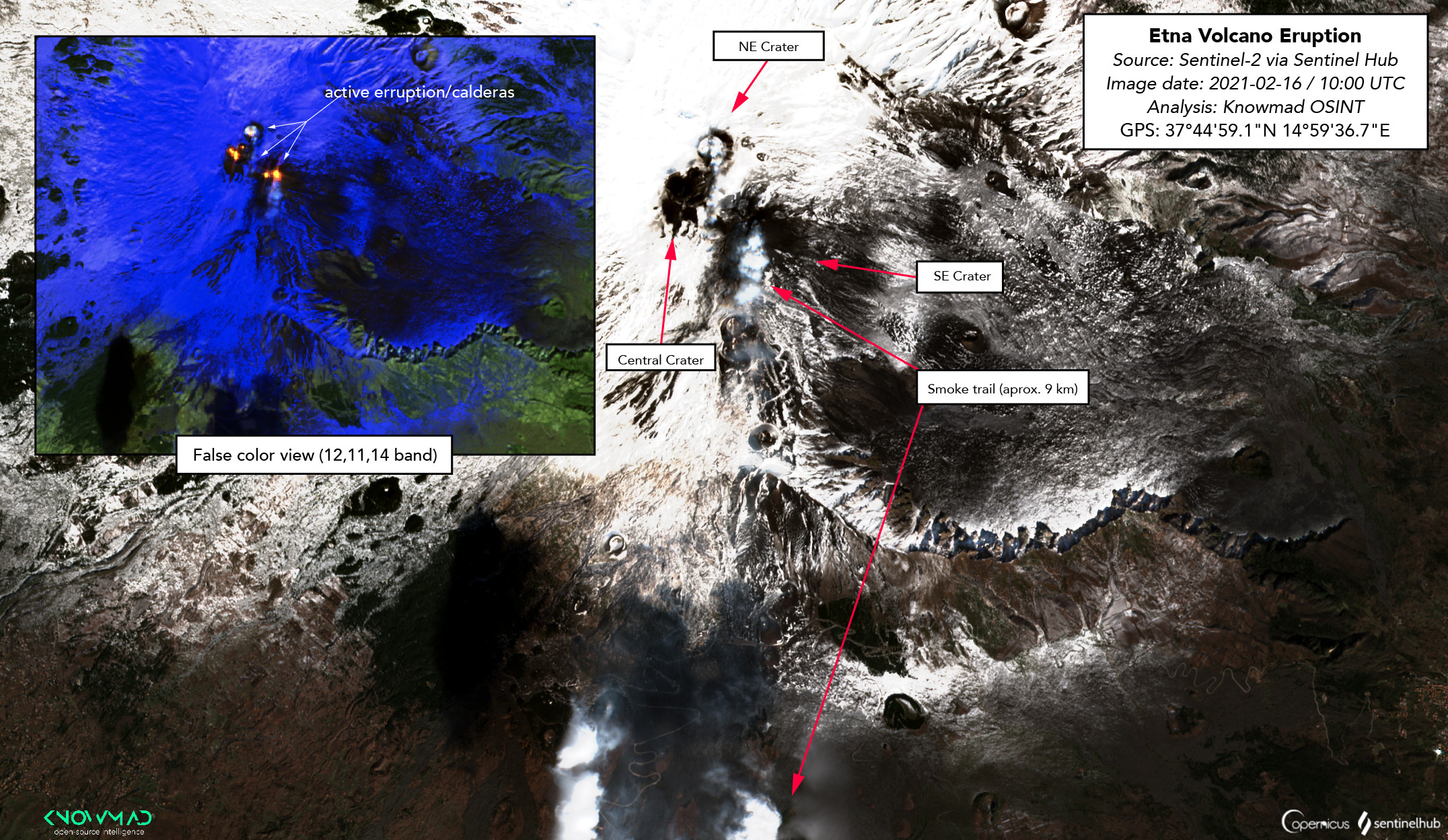 Smoke trails are also visible. They measure approximately 9 kilometers and are heading southward towards Catania and neighboring villages. That’s quite some information from a few clicks. But we can learn even more if we dive into the intricacies of false-color imagery.

Band combinations can be fun (and useful). And I’m not talking about mixing Nirvana with Linkin Park.

Satellite images are usually composed of multiple color bands. The natural-looking imagery is a mixture of Red, Green, and Blue, or RGB. But you can affect many other combinations to highlight certain features on Earth – burn marks, moisture, fire, water quality, soil fertility, etc.

Because of these combinations, satellite images can gain an unnatural look (false color), with the ground appearing blue and the snow red; or the water green and the clouds cyan.

In this case, I found the ready-made “False Color (urban)” from Sentinel’s Vulcanoes theme to work best.

Calderas are displayed in red and yellow, while the snow blanketing mount Etna receives a blue makeover – can’t hope for a better contrast than that!

The Short wave infrared (SWIR) composite is a good alternative but better suited for mapping fire damage. Check out the example below for reference (tap or click on the image to see it in color).

Both bandings help us localize the volcanic activity and note that Etna is blowing steam from all of its major craters. This is something we couldn’t have noticed on natural color imagery because of vapors, smoke, cloud cover, and the bright white snow – and the mixture of all of them.

Long story short, a simple operation like this allows you to stare into Sauron’s lair from the comfort of your living room – How OSINTy!

Stick around! I’ll make sure to post a timelapse of Etna’s “hot and heavy” activity as soon as new imagery becomes available.

Thanks to SOAR Earth’s generosity, we have obtained a breathtaking high-resolution imagery of Etna volcano (I recommend all geospatial geeks to check out SOAR’s all-in-one portal!). Taken at 50 cm/px resolution on February 24th, the image captured a moment of decreased activity in all of Etna’s craters. The latest update from the National Institute of Geophysics and Volcanology (28 Feb 2021), which you can read here, suggests that Etna is returning to a calmer state. More exactly, the institute notes that “lava supply is decreasing and cooling down”. Scientists have also observed the amplitude of volcanic tremor and infrasonic activity return to medium-low values.

Hopefully it will stay that way, and Etna (as well as Sicily) can finally get some rest.