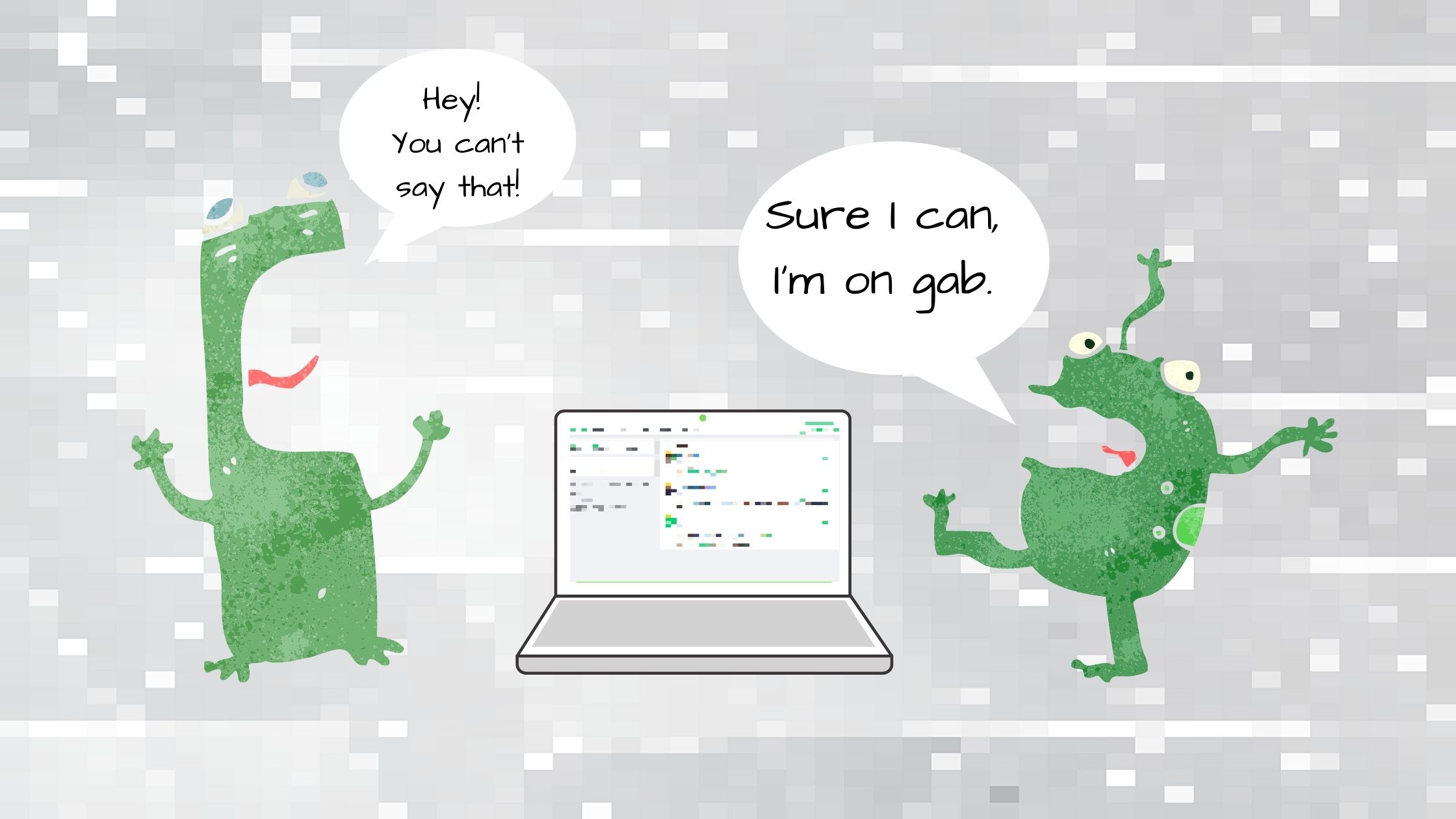 Most of my OSINT work covers armed conflicts and geopolitical events. But as an analyst, it’s essential to keep an open mind and learn about new tools and platforms. So when I stumbled upon Jake Crep’s tweet announcing a Skopenow webinar on “OSINT for Gab and Dissenter Investigations,” I was very interested.

I’ve tried to explore Gab several times before, but had to give up because the platform was incredibly buggy and unresponsive. The exodus of over 600k users from Twitter and Parler to Gab has put unexpected pressure on Gab’s limited capabilities. A few servers later, Gab is functioning fine – and thanks to Jake Crep’s insightful walkthrough (which you can read here), I was able to hit Gab’s sewers for a joyride without losing time with platform familiarization.

For those of you who don’t know: Gab is an alternative social media platform associated with conspiracy theorists and far-right groups. Founded in 2016, Gab prides itself on championing free speech (aka little to no content moderation). Gab’s hands-off policy has turned the platform into a safe haven for QAnon conspiracy theorists, White Supremacists, and other extremists.

In 2018, the Pittsburgh synagogue shooter announced his attack on Gab, where he had a verified account. As a result, the FBI temporarily suspended Gab. But the platform resurfaced soon afterward.

In January 2021, Twitter banned President Trump’s account in connection to the violence at the U.S. Capitol. A few days later, Twitter removed over 70,000 accounts that promoted the QAnon conspiracy theory. This was part of Twitter’s crackdown on content that could incite violence leading to President Biden’s inauguration.

Facebook had a similar purge. But the final blow for the QAnon community & Co. came from Amazon. Amazon Web Services stopped hosting Parler, an alternative social media platform popular among far righters, QAnon supporters, and die-hard Trump fans. With Parler down and mainstream platforms out of the question, renegade users took refuge on Gab. Many Trump supporters and Conservatives have also moved to MeWe and reinforced their safe havens on 4chan.

(This list is a combination of fun, quirky observations and not advanced OSINT notes)

1.Creating and maintaining a burner account on Gab is very, very easy.

Besides email confirmation, there’s no other verification measure in place. You also don’t need to mimic authentic behavior or make your account seem “real.” No one’s checking. Not like Facebook, for example.

The overall interface is modeled on Facebook. Twitter motifs are also visible – profile look, retweet-system, “followers” instead of “friends.” I have also noticed that users tend to treat Gab like Twitter, keeping their posts “short and sweet,” although there’s no word limit. Despite these similarities, Gab feels like its own thing – when it works.

3. Gab is buggy and unresponsive (but it has improved).

As I previously mentioned, Gab was simply unusable in early January. While server upgrades fixed most of the problems, the platform periodically continues to brick – probably during peak time. My biggest troubles are the search function and loading group content – which is unfortunate because that’s what could be most useful for OSINT.

4. Gab is full of QAnon-dedicated groups (“as advertised”).

A quick, targeted group search will reveal a plethora of – mostly public – QAnon conversation groups. The most populated groups are “QAnon and the Great Awakening” and “QAnon” with 194k and 144k members. At the bottom of the list are smaller groups dedicated to foreign QAnon communities (Germany, Spain, Poland, Australia/NZ, etc.). It’s safe to say that the vast majority of Gab users are U.S. citizens. 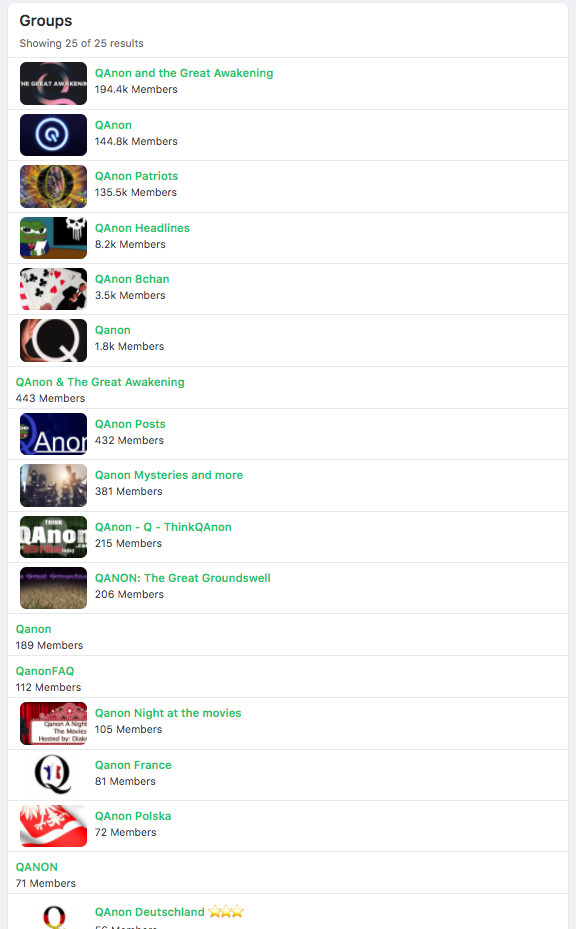 Preview of QAnon groups on Gab

Exploring these groups can be fun, weird, and repulsive simultaneously, but it’s part of doing OSINT. During my voyage, I’ve encountered a deeply demoralized community of exiles struggling to cope with Donald Trump’s imminent departure. While some have renounced their allegiance to the Donald after Biden’s inauguration, others claim that everything is still “part of the plan.” Q’s plan that is. 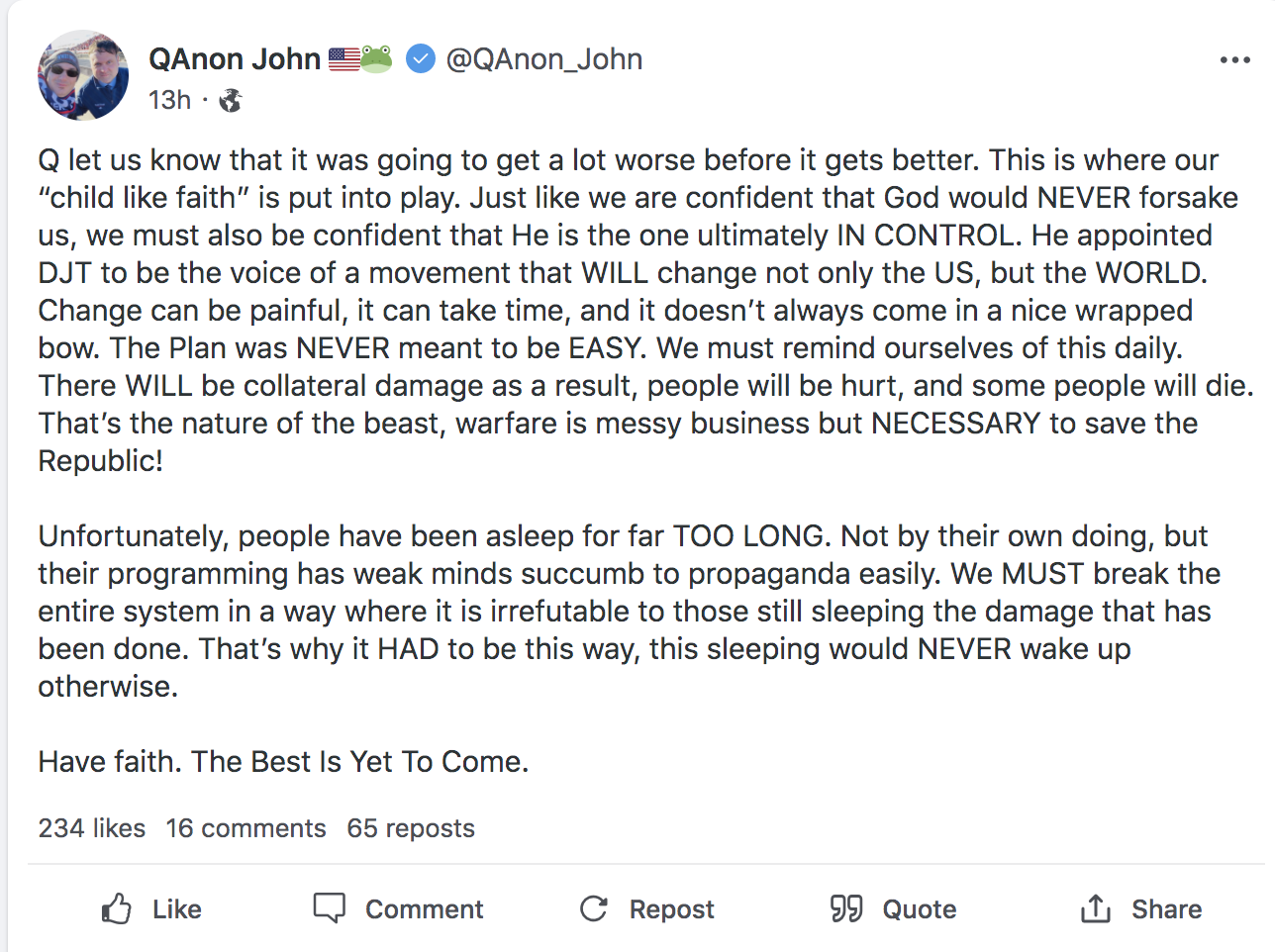 Fake news dominates the informational environment, accompanied by poor quality images claiming to unveil conspiracy after conspiracy: from the typical “Cabal world government controls everything” to “Biden’s inauguration was a hoax.” It is, however, “fascinating” how QAnonists manage to adapt old-school conspiracies to current events, creating a catch-all narrative. 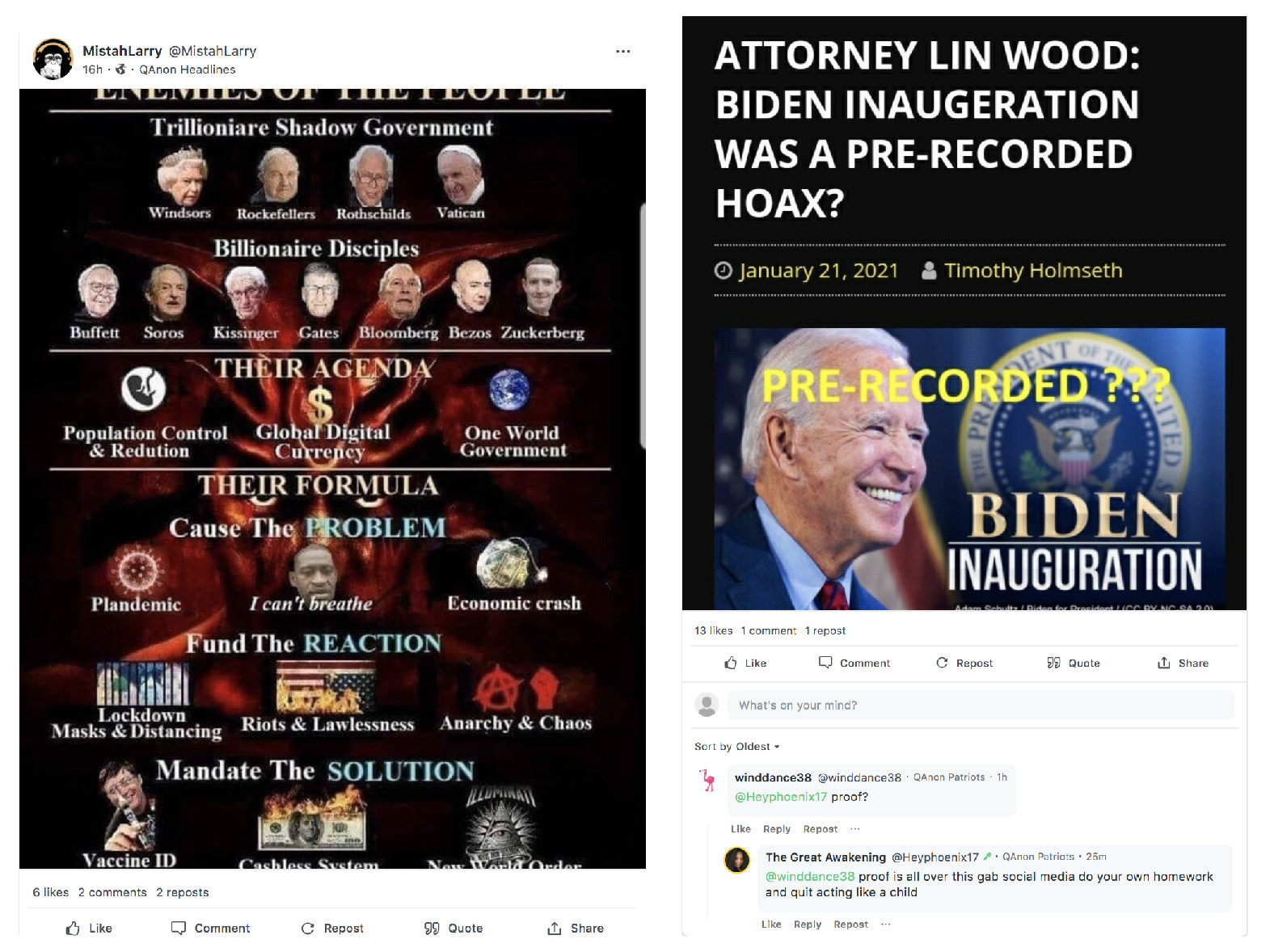 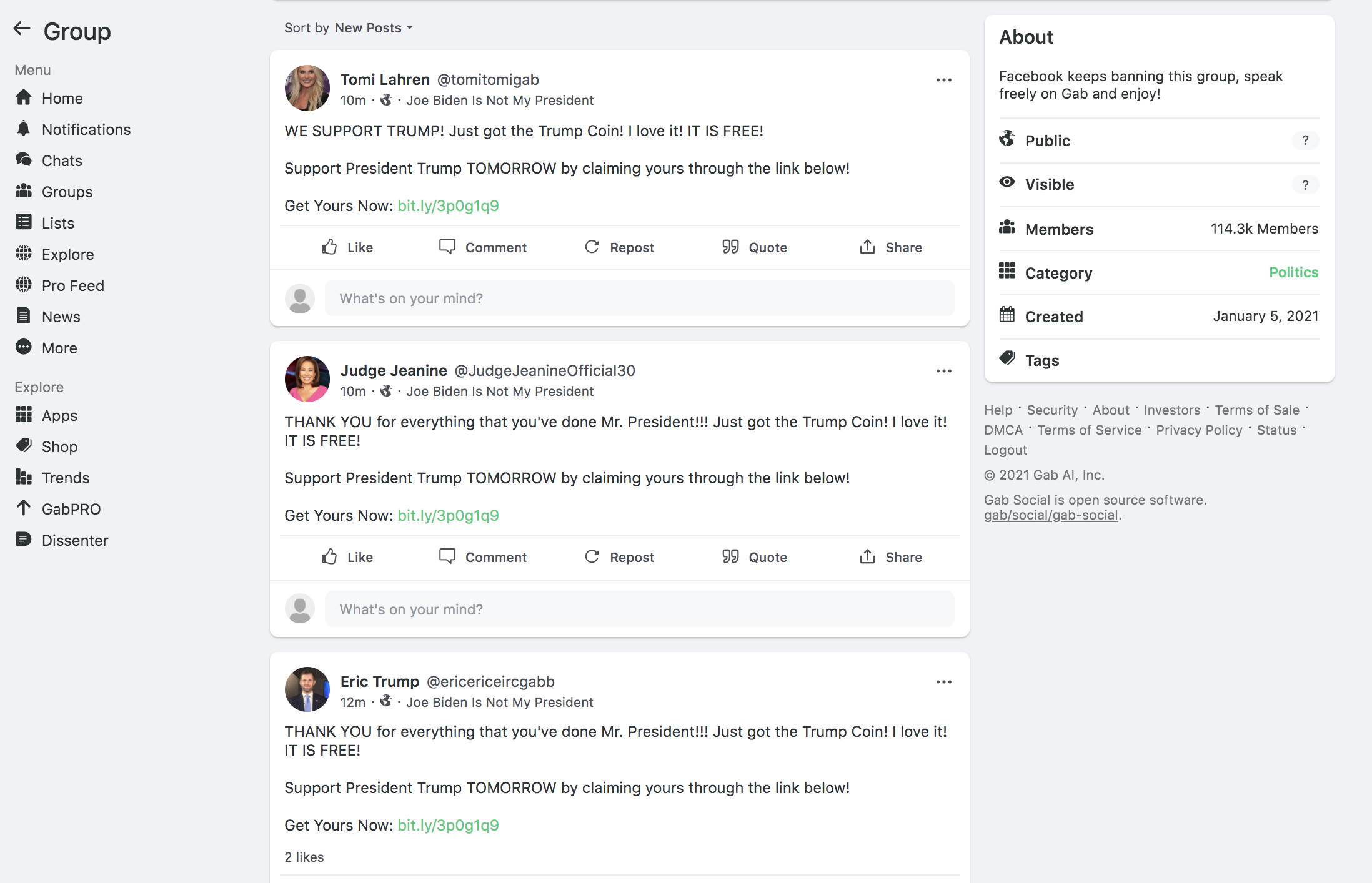 These echo-chambers are perfectly suited for whoever is selling these coins to advertise directly to Trump die-hards. 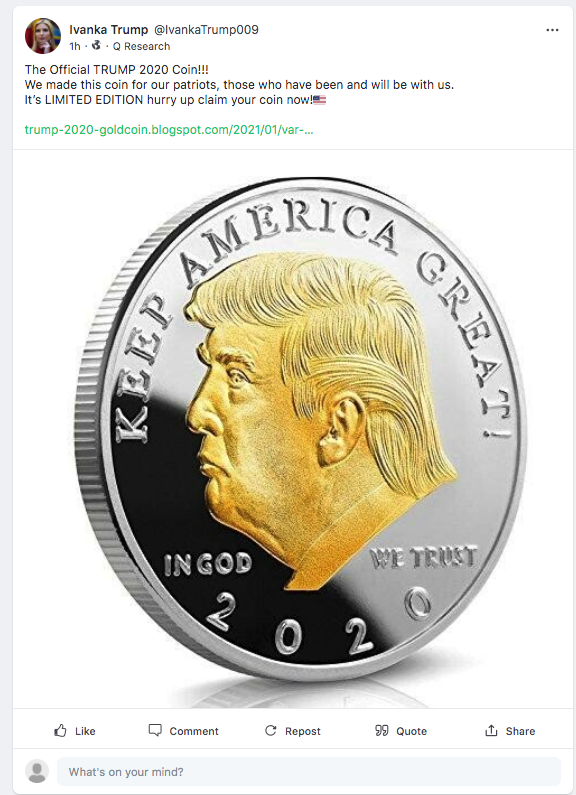 The funny part is that the spammers saturated the discussion boards to such an extent that administrators had to take action and… moderate. 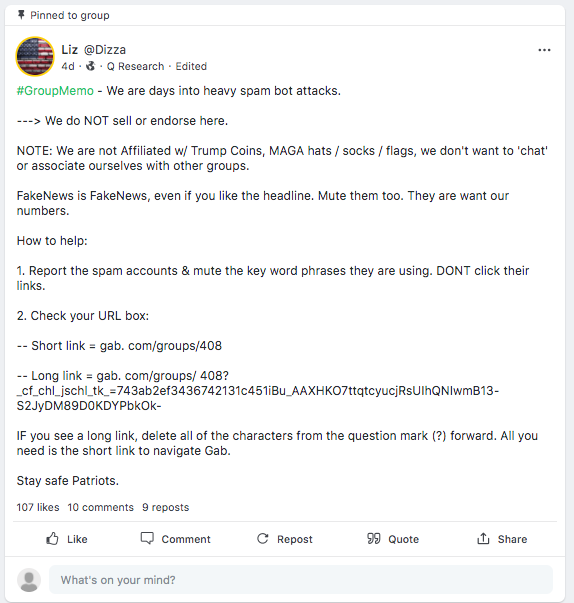 5. Gab is the Alt-right’s playground (“as advertised”).

Nowadays, right-wing extremist content is rarely the in-your-face type people expect. On Gab, you’ll mostly find young alt-right supporters. So mostly tech-savvy Millennials that manifest extremist ideas through humor and memes. Those of you familiar with the now-defunct /theDonald Reddit thread or 4Chan’s /politicallyincorrect will know what I’m talking about. Pepe the Frog, the unofficial symbol of the alt-right, is everywhere.

Besides user-generated content and alt-right influencers like Andrew Anglin, Gab hosts an assortment of alternative news pages. Many of them promote wacky conspiracies like the “white genocide.” This “theory” claims that there is a plot to terminate the white race through foreign immigration, racial integration, and abortion. It is often blamed on Jews and Muslims.

In all fairness, many of those “alt-news” outlets have left Gab after the platform sanctioned them for violating community standards. Gab does have community standards (called “content standards”) that deny users several things, including to “unlawfully threaten,” “incite imminent lawless action,” or “be obscene, sexually explicit, or pornographic.” The problem is these standards are either too weak or poorly enforced. 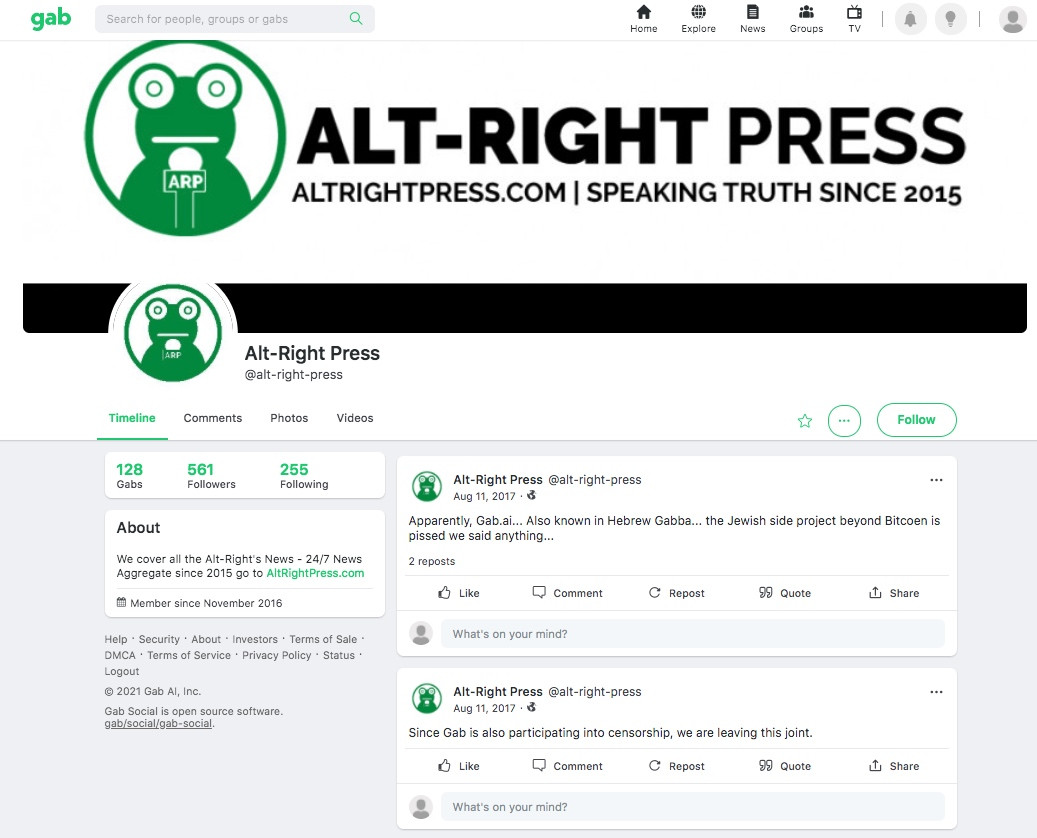 The latest digital migration underscores that there’s more out there for SOCMINT (Social Media Intelligence) than just Facebook and Twitter. Gab is an interesting case study for social media exploitation because it ticks different SOCMINT boxes: insights into groups and early warning. Time will tell whether Gab will be a home for QAnonists and alt-righters or just a quick pitstop for the exiled to lick their wounds.

While I’ll get back to my armed conflicts, I’ll leave a question for all of you OSINT enthusiasts:

What other fun/weird/interesting things did you spot on Gab?